7 December, 2014 / Ed Francis / Comments Off on Boats in Gloucester Docks

OK, this one is one of my favourites as it was one of those shots where you look at something, move, look again and it’s about a thousand times better. When I first looked at these boats, the water was being agitated by a few gusts of wind that had been whistling through the gaps between the Victorian warehouses dotted about the place. Speaking of the warehouses, they’re all shops, pubs, flats or offices now. So much better than when I was a kid and the whole area looked like a film set for a crappy neighbourhood in Gotham!

Anyhow, back to the point. I went off and found some other stuff to shoot as I was experimenting (unsuccessfully) with a few depth of field tricks. By the time I was making my way back, the water was much more calm and the sun had really got it’s act together causing the reflections to pop. I had to take this photo!

The final image was cropped to 16:9 format as it worked better than the 4:3 aspect my MX-1 shoots natively. It can do 16:9 but I prefer to crop after the photo has been taken, more choice.
Enjoy! 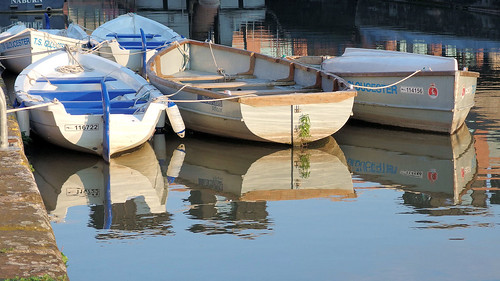 Hi there and thanks for calling by. Please feel free to have a rummage through the posts here. I'm hoping you'll find some informative or at least entertaining!

Theme by Anders Noren — Up ↑